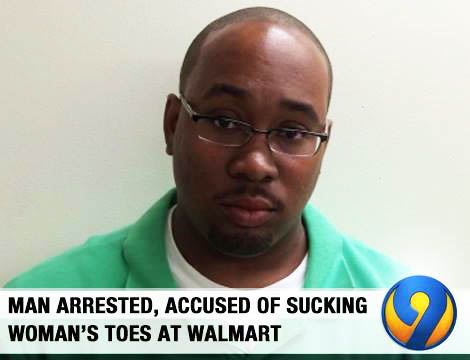 Charlotte, NC — A man was arrested and charged with assault after he allegedly tried to suck a woman’s toes in a local Walmart in Charlotte area North Carolina. The man, whose name is Michael A. Brown reportedly approached a woman in the shoe department, and started a conversation with her, telling her that he was a podiatrist student.

The victim told police that he then talked her into trying on several pair of shoes, and then took her foot, put it into his mouth and began sucking on her toes. Of course, the woman became upset. But according to police, Brown then walked out of the Walmart, got into his car and acted like nothing happened! “That tells me this isn’t the first time he’s done this,” said an investigating police officer.

He also reportedly tried to do it to another woman at a different Walmart earlier in the day. “Twenty-one years of law enforcement and I’ve never seen anything like it,” said one officer. “I’ve heard of foot fetishes before but … nothing on this scale here.”

Fortunately, the man was caught on surveillance cameras, and police were able to apprehend him.

Police later learn that Brown is a registered sex offender, and was convicted of attempted sexual assault in 2001.