NEW YORK (AP) — Taraji P. Henson says it was literally love at first sight when she met her new fiance.
The “Empire” star became engaged to her boyfriend, former Super Bowl star Kelvin Hayden, on Mother’s Day.
“I knew he was gonna pop the question because he all but told me himself. I just didn’t know when. That surprised me. He just did it,” Henson said Monday as she attended an annual event where Fox promotes its new TV lineup to advertisers.
The actress said she was introduced to Hayden by her makeup artist three years ago.
“She was like, ‘You need to go out. You need to meet somebody. You’re too fly. You’re too amazing.’ I was like, ‘I don’t know.’ She’s like, ‘You’re not gonna meet him at home. You need to go out.’”

The makeup artist arranged a party full of eligible bachelors for Henson to mingle with, but the star demanded to see photos first, and became enamored with Hayden.
“I was like, ‘Wow, something about his eyes are so gentle.’ And you know how they say you can fall in love at first sight from a picture? That’s exactly what happened,” she recalled. “So when we got to the actual event, I met everybody, I shook all the other guys’ hands and I literally was looking for him and when he walked up to where I was it was like people parted like the Red Sea, a light came on, I heard angels and he reached out to shake my hand and we danced and we talked and we were hanging out every day since.” 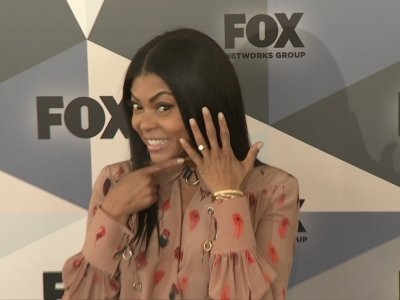 Actress Taraji P Henson spills the beans about her engagement and reveals how she met her fiance, former NFL cornerback Kelvin Hayden. (May 15)

Hayden played for the Atlanta Falcons, Chicago Bears and Indianapolis Colts. He won a Super Bowl for that team in 2007.
Henson says her “Empire” co-stars are thrilled with the news.
“Jussie (Smollett) came down to my room and screamed and did backflips,” she said.
Terence Howard says Hayden must be special for Henson to choose to be with him.
“I’ve never known any person that she’s worked with that’s ever been able to go on a date with her, you know,” Howard said. “She’s that secure about maintaining her integrity, so for her to let Kelvin in, I’m like, ‘Wow. That’s a big move. That’s a big move right there for her.’”