CHICAGO (AP) — Ayrial Miller is clearly annoyed. Her mother is sitting with her on the couch in their Chicago apartment, scrolling through the teen’s contacts on social media.
“Who’s this?” asks Jennea Bivens, aka Mom.
It’s a friend of a friend, Ayrial says, and they haven’t talked in a while.
“Delete it,” her mom says.
The 13-year-old’s eyes narrow to a surly squint. “I hate this! I hate this! I hate this!” she shouts.
Yes, Bivens is one of “those moms,” she says. The type who walks into her daughter’s bedroom without knocking; the kind who tightly monitors her daughter’s phone. She makes no apology.
Nor should she, says a retired cybercrimes detective who spoke to her and other parents in early June at Nathan Hale Elementary School in Chicago.

“There is no such thing as privacy for children,” Rich Wistocki told them.
Other tech experts might disagree. But even they worry about the secret digital lives many teens are leading, and the dreadful array of consequences — including harassment and occasional suicides — that can result.
Today’s kids are meeting strangers, some of them adults, on a variety of apps. They range from the seemingly innocuous Musical.ly — which lets users share lip-syncing videos — to WhatsApp and, more recently, Houseparty, a group video chat service. Teens are storing risque photos in disguised vault apps, and then trading those photos like baseball cards. 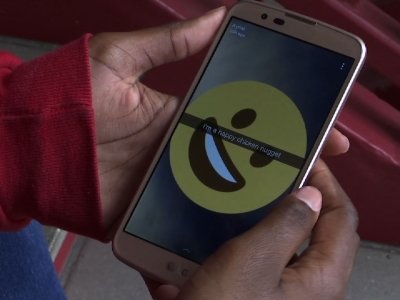 What your kids are doing online might surprise you. Increasingly tech-savvy kids are often living secret digital lives on social media and can go to great lengths to avoid parental detection. (June 26)

Some even have secret “burner” phones to avoid parental monitoring, or share passwords with friends who can post on their accounts when privileges are taken away.
David Coffey, a dad and tech expert from Cadillac, Michigan, said he was floored when his two teens told him about some of the sneaky things their peers are doing, even in their small, rural town.
“I gotta hand it to their creativity, but it’s only enabled through technology,” says Coffey, chief digital officer at IDShield, a company that helps customers fend off identity theft.
It’s difficult to say how many kids are pushing digital boundaries this way, not least because the whole point is to escape adult detection. Social media accounts are easy to establish and discard. Particular apps also rise and fall out of favor among teens with lightning speed, making them a moving target for researchers.
But academics, experts like Wistocki and Coffey, and many teens themselves say it’s surprisingly common for kids to live online lives that are all but invisible to most parents — for better or worse.


Parents are clearly outmatched. Exposed to tablets and smartphones at an increasingly early age, kids are correspondingly savvier about using them and easily share tips with friends. Parents, by contrast, are both overwhelmed and often naive about what kids can do with sophisticated devices, says Wistocki, whose packed schedule has him crisscrossing the country to speak to parents and young people.
He often holds up a mobile phone and tells wide-eyed parents that giving a kid this “ominous device” — and allowing them to have it any time, including charging in their rooms at night — is like handing over the keys to a new Mercedes and saying, “Sweetheart you can go to Vegas. You can drive to Texas, Florida, New York, wherever you want to go.”
And kids are more than happy to oblige. At a separate talk for students at Nathan Hale, a large K-8 public school near Chicago’s Midway airport, Wistocki asked who had accounts on Instagram, Twitter, Snapchat and other apps and games with social components. Most of the kids in attendance, many younger than 13, raised their hands.
Afterward, one girl, all frizzy hair and braces, approached a reporter with desperation. “Please, please, pleeeeease, don’t use my picture or a video of me raising my hand,” the 13-year-old begged repeatedly, despite assurances that she wasn’t caught on camera.
“Don’t use mine either,” a friend quickly piped in. Throughout the day, kids said their parents either don’t know they’re on social media or have little idea what they do with their accounts.
That exasperates Dawn Iles-Gomez, the school’s principal, whose days are increasingly filled with drama that begins on social media.
And it’s often not the usual suspects in her office, she says, but a diverse parade of students she sees acting one way in person and very differently in the digital world.
“It’s shocking — the language and the threats and the mean things that are said,” she says. “And I would say 75 percent of the time, I call a parent and their parent will say, ‘Well, no, they said they didn’t do that.’
“And I’m like, ‘Well — they did.’”
These kinds of incidents can turn particularly ugly, sometimes involving surprisingly young participants.
In January, two 12-year-olds were arrested in Panama City Beach, Florida, for cyberstalking that police said led to the suicide of a classmate named Gabriella Green, who’d been repeatedly bullied.
In other instances, young people are buying drugs via social media or encrypted websites. Or, as Coffey’s kids explained to him, they can use prepaid “gift” cards for Amazon or eBay — available at most any drugstore — to buy contraband. They order makeup, say, or vaping accessories, and have them delivered to friends’ houses.
Law enforcement officials say the taking and sharing of racy “sexting” photos and videos also has become a common and even expected component of dating life for many teens.
Last year in Naperville, the Chicago suburb where Wistocki worked as a detective for many years, a 16-year-old killed himself after police discovered that he’d recorded himself having sex with a classmate and then shared the recording with his hockey teammates. While searching his phone, they also found photos of other partially nude girls in a secret photo vault app disguised as a calculator.
And yet, Wistocki says, too often parents remain in denial with what he calls “NMK — not my kid.”
To get parents to the meeting with Wistocki at Nathan Hale, the principal offered extra 8th-grade graduation passes and other incentives. Only about 70 parents showed up; the school has 930 students.
Kathleen Kazupski, a mom with two daughters ages 13 and 17, was one of them. “As parents, we need to wake up, no doubt,” she said afterward.
She came, in part, because she discovered last fall that her younger daughter was messaging with a boy she didn’t know — first on Snapchat and then via text — until Mom put an end to it. “I scared the hell out of her.”
Bivens, Ayrial’s mom, also attended. She uses an app called MMGuardian, one of several available, to manage and monitor her 13-year-old daughter’s phone use. She shuts the phone down during the school day (though her daughter can still call her) and at bedtime. She turns off certain apps, sometimes as punishment, and monitors texts.
To closely watch most social media, though, she has to use her daughter’s phone. When that’s not possible, she checks what she can see from the accounts she knows exist, using her own accounts. Recently, she got after her daughter for cussing on some of her video posts.
“It’s a full-time job,” Bivens concedes. “People laugh at me because I monitor her stuff. But I don’t have the same problems as other people do.”

A 2016 Pew Research Center survey found that only about half of parents said they had ever checked their children’s phone calls and text messages or even friended their kids on social media. They were even less likely to use tech-based tools to monitor their teens or block certain apps.
Android phones now offer some parental restriction options, including screen time limits and app blocking, via a service called Google Family Link — though it’s designed specifically for kids younger than 13. An upcoming update to iPhone system software, which already allows for parental approval of app and music purchases, will give parents more control over screen time, app usage and web surfing on iPhones, iPads and iPods.
Independent monitoring apps also have proliferated. Some give parents more options for viewing and managing what their kids are posting on services such as Instagram or Snapchat — often for a monthly fee. These tend to be more effective on Android phones, says Wistocki, who recommends such tools in his talks with parents.
He closely monitored his own sons until they turned 18, and tells parents they should do the same.
Other tech experts agree that monitoring makes sense for younger kids. But Pam Wisniewski, a computer-science professor at the University of Central Florida, is among those who suggest a gradual loosening of the strings as teens prove they can be trusted.
“I’m almost to the point where I feel like the world would be better off without social media,” says Wisniewski, who studies human computer interaction and adolescent online safety. “But I’m also a pragmatist.”
Rather than cutting off kids from social media, she encourages parents to look for teachable moments. When inappropriate material runs through their feed, for instance, she suggests discussing coping strategies, such as hiding that person’s posts or blocking them.
Sarita Schoenebeck, an assistant professor and director of the Living Online Lab at the University of Michigan, says her research also has found that shutting teens out of social media only tends to make them sneakier.
“No kid wants to be pulled over and told not to do this,” Schoenebeck says. “Try to figure out how to talk about it in an open-minded way.”
Even Wistocki, while hardcore on monitoring, tells parents to offer their children the “Golden Ticket” — no punishment when they come to them about mistakes they’ve made online or help they need with a social media problem.
Ayrial’s mom is all for that, especially having learned that monitoring and blocks on apps aren’t foolproof. Recently, Ayrial started a live videostream on Twitter and encountered a stranger who asked her to show her bare feet. It was a “creepy” request, the teen said, that caused her to end the connection quickly.
She had sidestepped a block on social media by using a tablet. But she did tell Mom what happened soon after.
Ayrial still isn’t happy that her mom is going through her contacts with her. The soon-to-be eighth-grader appreciates that “she cares about me,” but hopes Mom will eventually “back up” a bit.
“When I’m in high school, that might get embarrassing sometimes, you know?” she says. “You need to learn your own — how do I put this? — discipline. . You need to learn from your own mistakes.”
If Mom doesn’t give her that space, she says, she’s always coming up with new tricks to get online secretly, just as her friends do.
And no, she won’t share how.
____
Online:
Wistocki’s TEDx Talk: https://www.youtube.com/watch?v=k2buaziaNnE
University of Michigan Living Online Lab: https://yardi.people.si.umich.edu/lol/
Google Family Link: https://families.google.com/familylink/
Apple’s Family Page: https://www.apple.com/families/
___
Martha Irvine, an AP national writer, can be reached at mirvine@ap.org or at https://twitter.com/irvineap