NEW YORK (AP) — New York Fashion Week has opened its glamorous tent wider to feature models with disabilities wearing adaptive clothing designs by Tommy Hilfiger, Nike and Target.
Organized by the Runway of Dreams Foundation, the show on Wednesday included a catwalk welcoming to wheelchairs, crutches, walking canes and more. Actor and model RJ Mitte of “Breaking Bad” was host.
Mitte said he understood the importance of inclusion on a personal level, having been diagnosed with cerebral palsy at age 3. “I’m really excited to see all this inclusivity and all of these strides to be diverse,” he said.

The founder of Runway of Dreams, Mindy Scheier, was inspired to start her foundation when her son, Oliver, who has muscular dystrophy, told her he wanted to wear clothes like everyone else. His request was for blue jeans_a clothing item that would prove difficult to pull on and off with his condition unless the pants were modified. She decided to make him an adaptive pair on her own and realized the need for more adaptive clothing lines for individuals with disabilities.
“Fashion is a direct correlation to how we feel about ourselves, our confidence, our self-esteem,” said Scheier. “And if you don’t have that, if you don’t have options, it can really affect how you feel about yourself. So truly, clothing is a basic need. So, shouldn’t we all feel really good and have options like everybody else?” 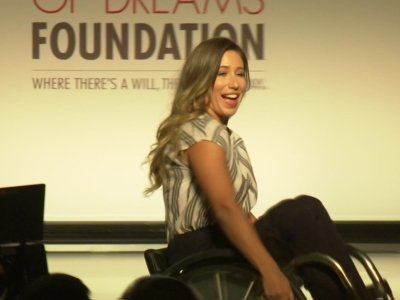 Model Mama Cax, recently featured on the cover of Teen Vogue’s September issue for “The New Faces of Fashion,” lost her leg during a battle with cancer. She is now an advocate for inclusion in the fashion industry and walked the runway Wednesday.
She said she wanted to see people with disabilities cast in movies and TV in lead roles or as love interests but without any “inspiration piece attached to it,” adding: “We want to see them in a normal role, average role, like we do in our everyday lives.”


Jason Redman never expected to find himself at a fashion show. Redman was a U.S. Navy SEAL who suffered injury to his face and body when he was struck by machine gun fire during a special operative mission in Iraq. He received the Inspirational Achievement Award for the clothing company he founded, Wounded Wear.

“People underestimate the power of clothing, the power of wanting to feel good and look like everybody else around us. And that’s what this organization does. So to be here, to be an awardee, to be a part of it, it’s pretty awesome.”