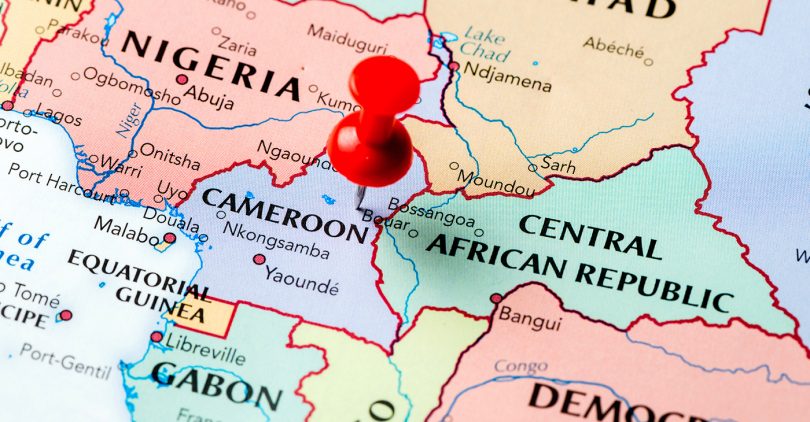 We are desperate to find resolution, as troops led by Cameroon’s Dictator Paul Biya’s government, continue to burn hundreds of villages, rape, detain and kills thousands of people and suppress the freedom of the press and protesters.
On October 30, 2018, in Bamendawhich is in the Northwest region of Cameroon, a fellow American and missionary, Charles Wesco of Indiana, was killed. It is believed that Wesco, who was traveling with his wife, Stephanie, in a car being driven by another missionary to the town of Bamnui from the Bamenda suburb of Bambili, where the family has been living. Charles Wesco was in the front seat, and two shots hit the windshield and struck him in the head. No one else was hurt.
It is believed that the incident occurred in the crossfire of Cameroon’s ongoing civil and electoral/voter recount war and unrest.
The following day, Senator Bob Menedez (D-NJ) released a statement, ““I am deeply saddened to learn of the death of an American missionary who sacrificed his life working to improve the lives of the people of Cameroon. As we wait for the details surrounding his death, I extend my heartfelt condolences to his family and friends during these difficult moments.”
While we also extend condolences to the Wesco family, we wonder how a man who was in Cameroon for only two weeks as a missionary can be realistically viewed as “working to improve the lives of the people of Cameroon.”
The Cameroon American Council has requested an emergency meeting with Senator Menendez to discuss the full impact of his recent statement along with other issues.
We pointed to the strong ties between Cameroon and New Jersey, including the decades-old sister city relationship between the City Douala, the economic capital of Cameroon, and the City of Newark, the largest city in New Jersey.
The significant Cameroonian population in New Jersey is a key aspect of the diaspora of U.S.-based Cameroonians, including those who are recent immigrants to New Jersey as well as many African Americans, like New Jersey’s junior Senator and former Newark Mayor, Cory Booker, who have traced their ancestral heritage and DNA to Cameroon.
Senator Menendez’s statement, in our opinion, was hyperbole, weak, incomplete and borderline racist. We indicated such in our email exchanges to the Senator and shared our views on social media.
The Senator’s office agreed to a November 1stmeeting in his Washington, DC office. Their only requirement was that we provide the names of all those who will attend the meeting. We complied and provided the names of those in our party.
At the meeting, we were reprimanded for essentially calling out Senator Menendez on his inaction and lack of response regarding the crisis in Cameroon after many months of soliciting his assistance in resolving the conflict. However, when an American was allegedly targeted and shot by the Cameroon government, Menendez immediately a statement which essentially called the American missionary a ‘White savior’.
The Menendez team abruptly ended the meeting and asked for our phones. We asked them why they needed our phones. We were told that the Senate building is ‘phone-free’ and they proceeded to confiscate our phones and to call the police on us. This was at the end of a meeting when any policy regarding the presence of phones could have been explained at the start of the discussion.
Our team included Blacks, Africans, immigrants and young people. This is the very demographic that Democrats like Menendez claim to court. Yet, the Menendez team has never returned our phones nor explained why they called the police on Black immigrants performing their civic duty.
More than 30 days later, we have still heard nothing from them about the return of our property. We’ve also reached out to Senator Booker for assistance and received no response.
Since the onset of the Cameroon Anglophone Crisis, the Cameroon American Council has asked Senator Menendez to make a series of public/visible actions on Cameroon, and he has consistently refused or failed to respond. He has literally pushed us into the arms of the Republicans.
Below are the 5 requests we made to Senator Menendez, which he refused to do, instead his staff called the police and confiscated (and failed to return) our property:

We are a group of U.S. Citizens, permanent residents and immigrants living legally within the U.S. In addition to asking for the return our confiscated phones, we still seek bi-partisan support and ask Senate Democrats to address our 5 requests listed above.
On December 20, 2018, we have a Senate briefing on Cameroon, hosted by, you guessed it, a Republican, Senator James Inhofe of Oklahoma.
We are desperate to find resolution, as troops led by Cameroon’s Dictator Paul Biya’s government, continue to burn hundreds of villages, rape, detain and kills thousands of people and suppress the freedom of the press and protesters. The Cameroon American Council has resorted to traveling across the USA to mobilize our community and allies to engage Republicans on Cameroon.
So, why is an organization, led by a Black, African, immigrant, young woman, relying on mainly Republicans to push our advocacy agenda on Cameroon? Well, surprisingly, the Republicans have been more accommodating to working together to establish Cameroon crisis advocacy tools.
Senate Briefing on Cameroon: Crises, Coalition, Congressional Actions.

Sylvie Bello is the passionate founder of the Cameroon American Council, the leading African Immigrant advocacy organization. Based in Washington, DC, with affiliates in 30 states; the Washington Post describes the Cameroon American Council as ‘The First Program of its Kind’.
Disclaimer:The views and opinions expressed in this article do not necessarily reflect the official policy or position of BlackPressUSA.com or the National Newspaper Publishers Association.