The dynamic soul known to the world as Diahann Carroll was born in 1935 and made her transition—at the age of 84—succumbing to cancer on October 4, 2019, in Los Angeles, CA.

Ms. Carroll was first diagnosed with breast cancer in 1993. A survivor, she worked tirelessly to raise awareness around the disease, its diagnosis, and treatment. She was a founding member of the Celebrity Action Council, a volunteer group that served the women’s outreach of the Los Angeles Mission.

Diahann Carroll is the consummate entertainer. She is one of America’s major performing talents appearing in nightclubs, the Broadway stage, a Las Vegas headliner, motion pictures and television. Diahann Carroll is a Tony Award winner, an Emmy and Grammy nominee, a Golden Globe winner and a Best Actress Oscar nominee.

Her television nominations go back to 1963 and in 1968, Diahann Carroll became the first Black actress in television history to star in her own series, Julia for NBC, which soared to the top of the Nielsen rating and received an Emmy nomination in its first year on the air. In 1989, she was nominated for an Emmy Award for the successful NBC TV series, “A Different World,” as an outstanding actress in a comedy series. In 1984, Diahann Carroll became the first Black actress to star in the award-winning nighttime series, “Dynasty.”

She had a recurring role in Showtime’s hit series “Soul Food,” playing the outspoken “Aunt Ruthie”, for which she was nominated twice for an NAACP Image Award. She guest-starred in Lifetime TV’s “Strong Medicine” and in NBC’s TV show “Whoopi,” playing Whoopi Goldberg’s mother. In 2004, she starred on stage in the musical “Bubbling Brown Sugar” receiving critical acclaim. In 2006, she appeared on ABC’s “Grey’s Anatomy” and in 2008, on USA Network’s “White Collar.”

In October of 1995, she starred on stage as ‘Norma Desmond’ in the Toronto premiere of Andrew Lloyd Webber’s hit musical “Sunset Boulevard,” staged by director Trevor Nunn and the show’s entire original creative team. Hailed by the press as “the ultimate Norma Desmond,” Diahann Carroll played to sold-out crowds and her Canadian cast recording outsold all other recordings of the show.

Diahann made her Broadway stage debut starring in Harold Arlen and Truman Capote’s “House of Flowers” and after seeing her in this production, Richard Rodgers created the Broadway production “No Strings” as a starring vehicle for Miss Carroll, for which she won the Tony Award. She also starred on Broadway in the award-winning play “Agnes of God.”

She is an award-winning actress, a successful entrepreneur, a devoted humanitarian… indeed Diahann Carroll is a legend.

In New York City a group of family, colleagues, friends and invited media gathered to celebrate the life of Miss Diahann [Carroll] at the Helen Hayes Theatre in New York City’s theater district on Sunday, November 24. Ms. Carroll’s daughter, Suzanne Kay, believed it was important to create a service in a place that her mother loved most – the Broadway stage – and with people whom she loved most. 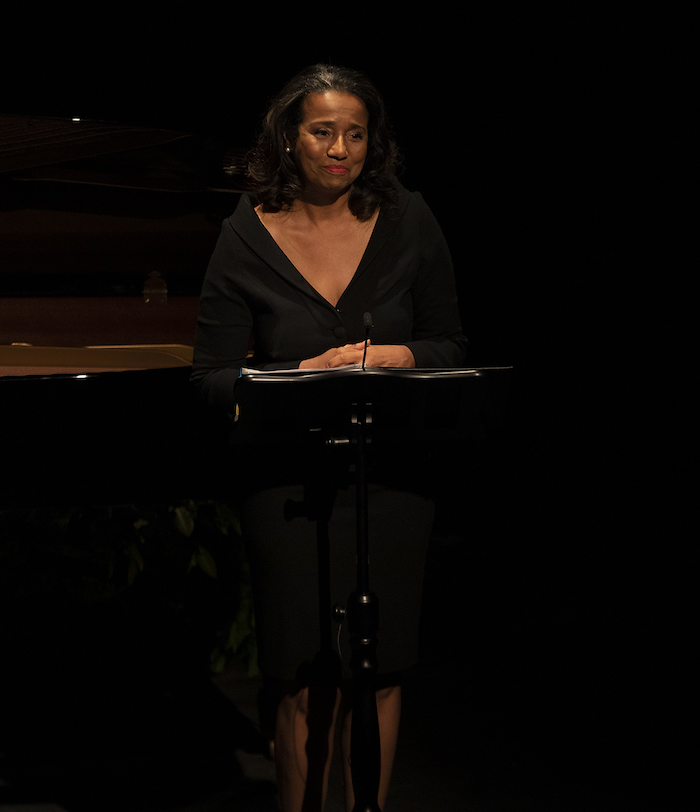 The celebration of life began with a performance of “A Sleepin’ Bee,” by Tony-nominated actress/singer Denée Benton. 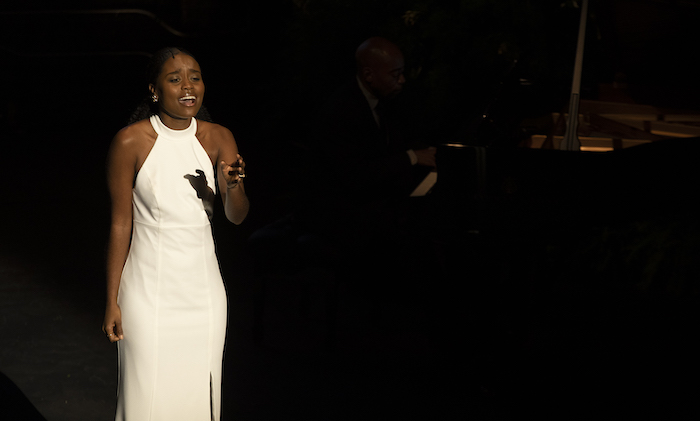 Diahann Carroll was introduced to the world in 1954 with “House of Flowers,” Harold Arlen, and Truman Capote’s Broadway musical. Suzanne Kay remarked on why she chose to open with the song offering this: “I was extremely honored when Ms. Benton agreed to perform ‘A Sleepin’ Bee.’ I know my mom, wherever she may be, couldn’t be happier to be celebrated in such a meaningful way on the stage today. She was always very passionate about ushering in a new generation of talented entertainers of color.”

The event continued with a poetry readings offered by Emmy Award-winning actor Laurence Fishburne (from Roscoe Lee Browne’s “Song”) who joked, imitating his version of Miss Diahann’s unique voice. “What can one say about Diahann Carroll—darling—I say ‘timeless.” More of her colleagues took to the podium to share their feelings of Ms. Caroll, the loved flowed, deservingly so with Oscar-nominated and Golden Globe-winning actress Angela Bassett (from Maya Angelou’s “When Great Trees Fall”); and Golden Globe and Emmy Award-winning actress Lynn Whitfield (from Lucille Clifton’s “Won’t You Celebrate With Me?”) offering their observations on what made Diahann Carroll such a force to be reckoned with. 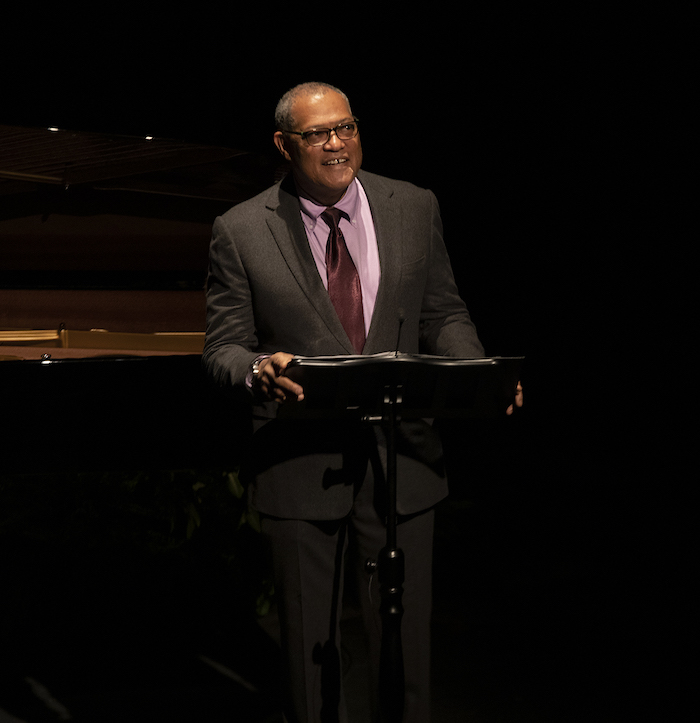 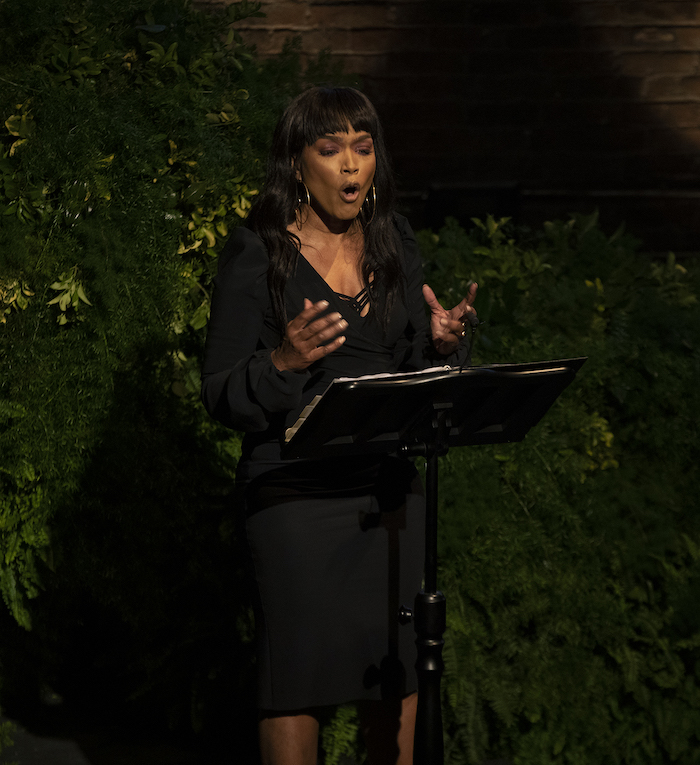 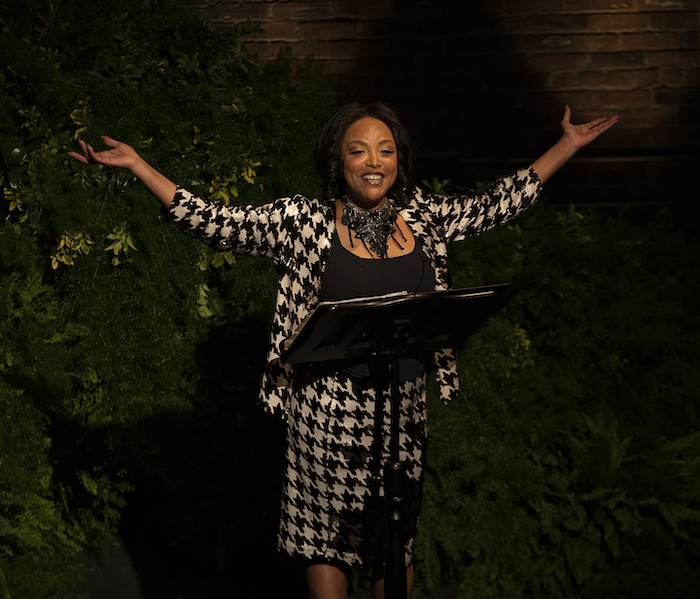 There were additional performances by Tony and Grammy Award-winning actor/singer Leslie Odom, Jr. who blew the roof off the place with “For All We Know.” Each person shared something new about Diahann Carroll her daughter joking that her mother turned down romantic advances from both Marlon Brando and John F. Kennedy Jr. We also learned that Carroll owned a piece of her television show “Julia,” an American sitcom (1967) that ran for three seasons (86 episodes) and was produced by Savannah Productions, Inc., Hanncarr Productions, Inc., and 20th Century-Fox Television. “She was the first African-American woman, in television, to ever own a piece of her own show,” shared her daughter Suzanne Kay. “The other women who could claim this was Marlo Thomas and Mary Tyler Moore.” 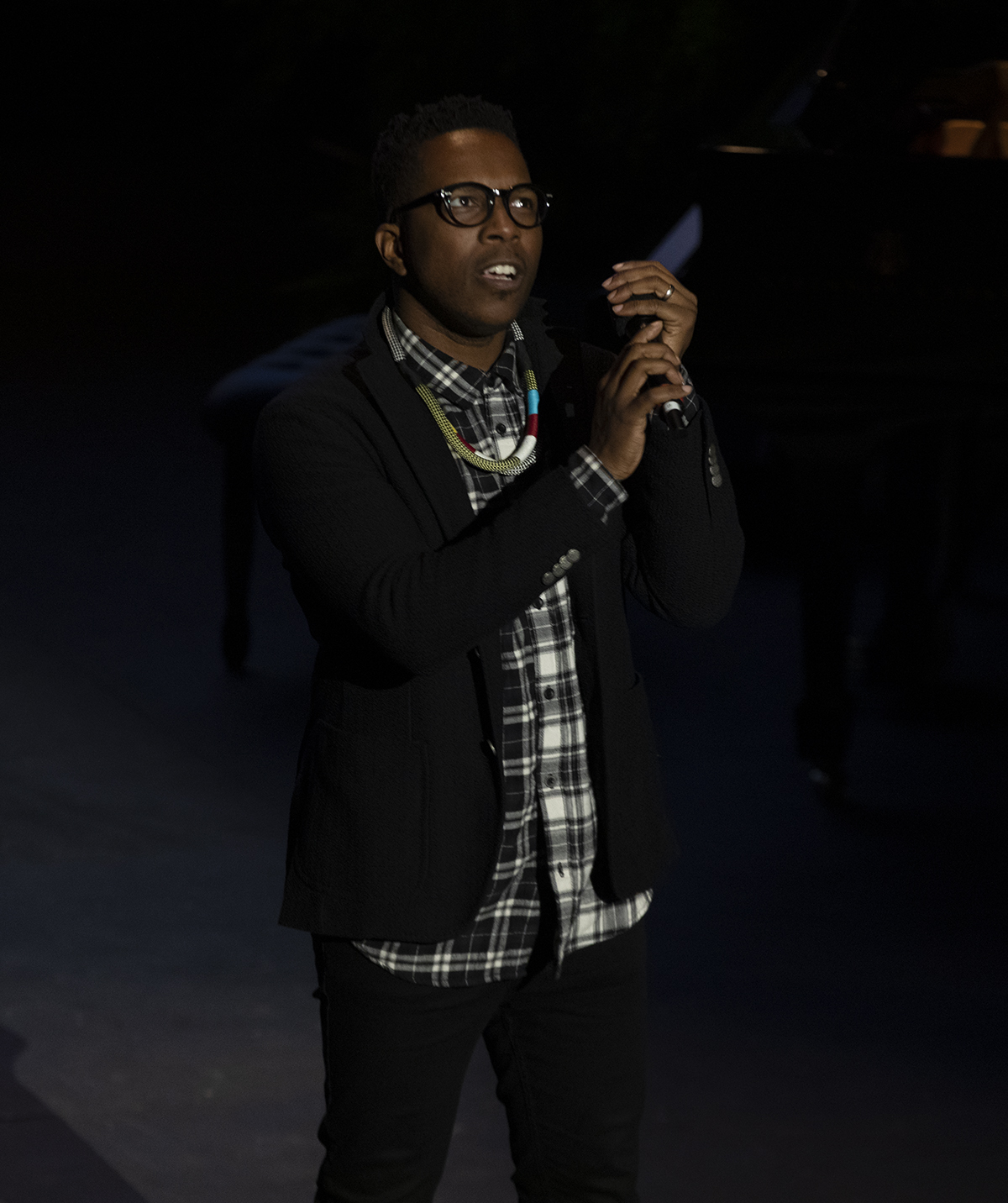 Others who shared their memories included Kennedy Center Honors alum Carmen de Lavallade, whose friendship with Carroll goes back to their Broadway debut in House of Flowers; Grammy Award-winning singer, Dionne Warwick, who spoke via video; and critically-acclaimed author and award-winning writer/producer, Susan Fales-Hill, for whom Ms. Carroll had been extended family stemming from her close friendship with Fales-Hill’s mother, the late Josephine Premice. 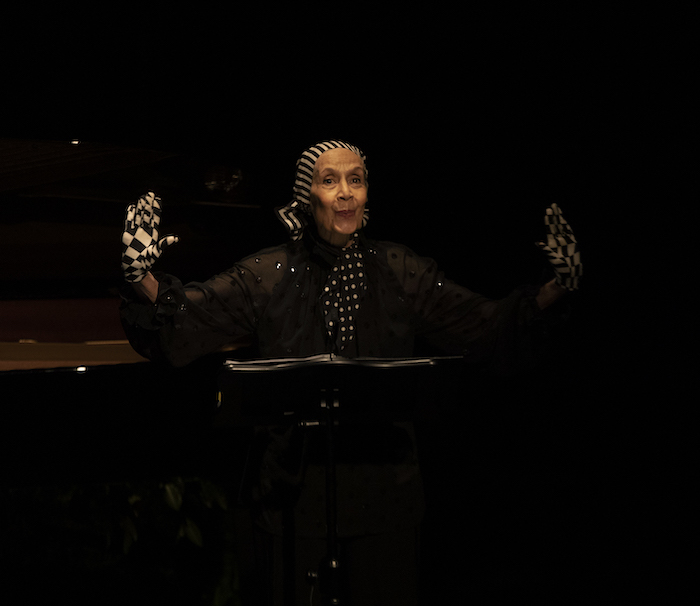 But it was the words of Academy Award-winning actress Cicely Tyson that really brought the house to an important recognition. “We become inseparable and we went everywhere together, we did everything together —- with exceptions—together,” joked Tyson. “She had what very few people realized an incredible sense of humor because she was always so proper, and so prim. Every now and then she would shoot a bolt that would have people [open their mouth in amazement] [asking] did that come from the elegant, swell-a-elegant, Diane Caroll? Yes, it did.” Miss Tyson took a moment becoming silent, gathering her thoughts before she could continue sharing her deep love for her friend— Diahann Carroll. “This is a very difficult moment for me, right now. I can only say that she [Diahann Carroll] came to me several nights in a row, in a dream, and I kept talking about calling her and I never got around to it. I did, however, fly out to the coast [Los Angeles, CA] to do some work and I made a decision not to leave Los Angeles without seeing her. I made a call to her daughter and she said, come on over. I went to see her. She was asleep at the time [I arrived] and I waited until she was able to be awakened.

It wasn’t Diahann. She was not the effervescent, really glamorous Diahann Carroll. [She was not] laughing and telling jokes. She could barely talk. I felt bad. I didn’t know what to do. I didn’t know what to say. I wanted to hug her and say don’t but I didn’t. I just knew that I had to be there and I stayed until Lenny Kravitz came in and took a look at me, and said, ‘what are you doing here.’ He was on his way to Japan, I believe, on a tour and he had to come to LA to catch a plane. And he said I’m going to run up and see Diahann. I am so grateful that I had those moments with her. “ 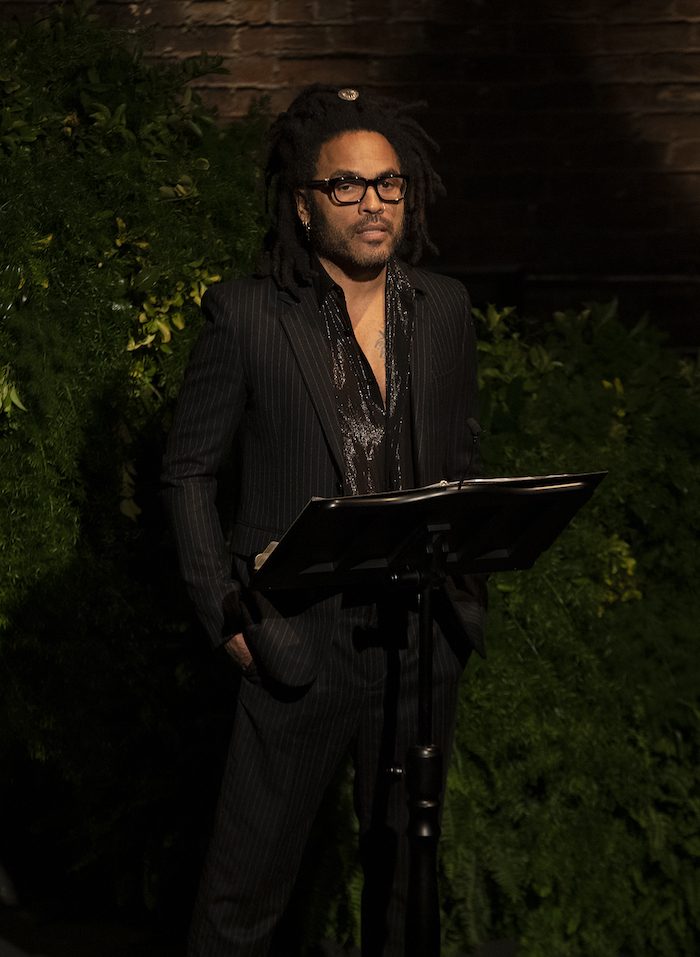 Before closing the memorial one of Carroll’s colleagues reminded us, with words from the poet Lucille Clifton that celebrating Miss Carroll was a celebration of gargantuan proportion— “…come celebrate with me that everyday something has tried to kill me and has failed.”

It was shared that one of Miss Carroll’s favorite songs, “Black Bird” was written by Paul McCartney and inspired by racial tensions in the late 1960s. “Black Bird” is actually about the freedom needed for Black women noting that the word Bird is British slang for a woman. 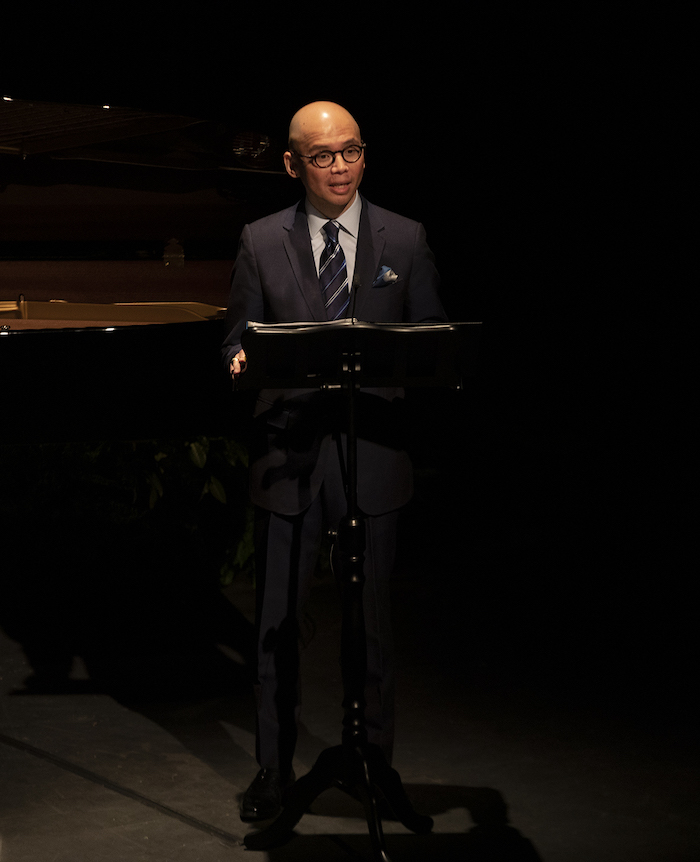 Grammy award-winning jazz vocalist, Dianne Reeves closed the memorial of the incomparable Diahann Carroll with “Black Bird.” To continue the legacy of Diahann Carroll the family encourages well-wishers to donate to a cause about which Ms. Carroll cared deeply: Planned Parenthood, www.weareplannedparenthood.org. 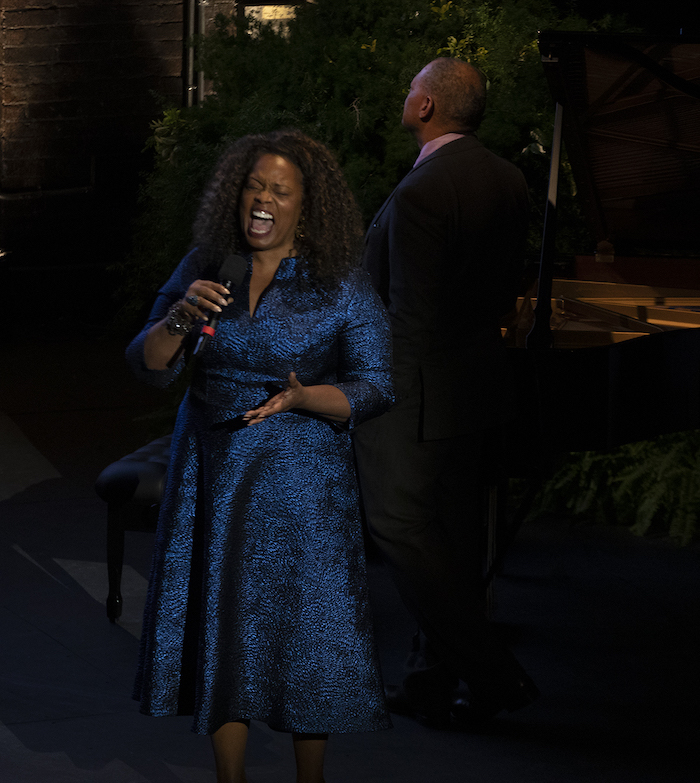