Projects across the city face ongoing hurdles from COVID-19.

Banks are swamped, contractors are scrambling, and the Bloomfield-Garfield Corp.’s Executive Director Rick Swartz needs one of each, pronto, if he’s going to get the Montana Building renovations on track.

Like virtually every other development or construction project in the state, the planned $675,000 renovation of the 16-unit affordable apartment building in Friendship was floored by the novel coronavirus. As the state allows construction to resume Friday for the first time since the March 19 order closing most businesses, Swartz sees a narrow window to proceed — and hopes that window doesn’t slam shut.

The longtime nonprofit developer said Wednesday that he’s trying to get his bank loan closed by May 7 but has found that “it’s hard to get the necessary attention” because bank staff are busy with small business applications for federal Paycheck Protection Program loans.

The urgency? The BGC’s contractor is hungry to start the job May 8, but may look elsewhere if the finances aren’t finalized, according to Swartz. Contractors “all have other jobs they’re waiting to do, and now it comes down to: Who is organized and ready to pay them?” 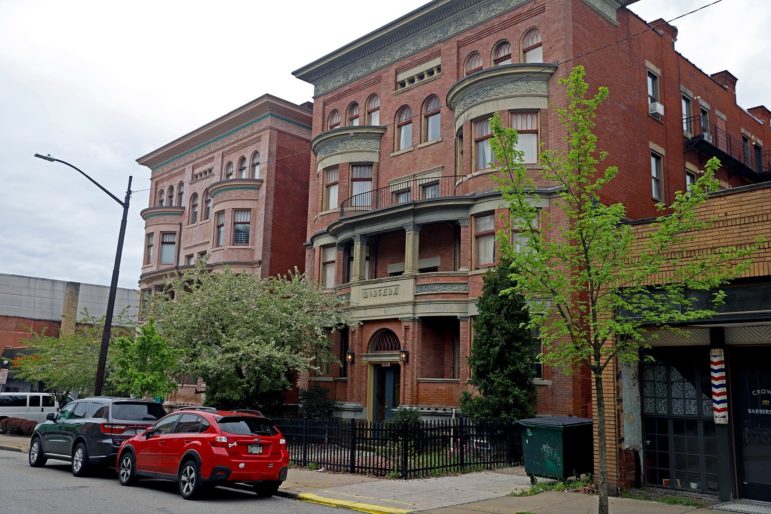 The Montana Building, on Penn Avenue in Friendship, is slated for renovation, but hurdles remain. (Photo by Jay Manning/PublicSource)

Financing challenges and in-demand contractors are among the challenges facing Pittsburgh-area developers as construction resumes amid a historic economic downturn. PublicSource this week reached out to 16 development pros — both for-profit and nonprofit — with work in Pittsburgh supported by the Urban Redevelopment Authority [URA].

All said they were eager to start building again after six weeks of job-site silence, but many remained wary of the future.

The Lemington Home for the Aged construction site, where earth-moving equipment has lately served only to deter trespassers. (Photo by Jay Manning/PublicSource)