Mr. trump, the man pictured with this post was not a loser. He loved his country and his family, and he served to protect the freedoms that we enjoy. He was a part of my family, and we miss him very much.

If there is anyone reading this who doesn’t believe that Mr. trump did in fact say all the nasty and disparaging things about the men and women who serve this country, I have a nice antique bell here in Philadelphia with a slight crack on the side to sell you.

Of course he said it. And we know he said these things because he said them publicly about John McCain. Can you imagine a man who is afraid of peaceful protesters outside of the White House calling men and women who put their lives on the line for this country, “losers and suckers”? We can add liar as well as coward to describe him because he had the audacity to say that he didn’t call John McCain a loser. 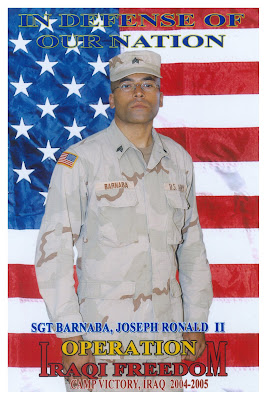 Below is an excerpt from the Jeffrey Goldberg story.

“When President Donald Trump canceled a visit to the Aisne-Marne American Cemetery near Paris in 2018, he blamed rain for the last-minute decision, saying that “the helicopter couldn’t fly” and that the Secret Service wouldn’t drive him there. Neither claim was true.

Trump rejected the idea of the visit because he feared his hair would become disheveled in the rain, and because he did not believe it important to honor American war dead, according to four people with firsthand knowledge of the discussion that day. In a conversation with senior staff members on the morning of the scheduled visit, Trump said, “Why should I go to that cemetery? It’s filled with losers.” In a separate conversation on the same trip, Trump referred to the more than 1,800 marines who lost their lives at Belleau Wood as “suckers” for getting killed……There was no precedent in American politics for the expression of this sort of contempt, but the performatively patriotic Trump did no damage to his candidacy by attacking McCain in this manner. Nor did he set his campaign back by attacking the parents of Humayun Khan, an Army captain who was killed in Iraq in 2004.

Trump remained fixated on McCain, one of the few prominent Republicans to continue criticizing him after he won the nomination. When McCain died, in August 2018, Trump told his senior staff, according to three sources with direct knowledge of this event, “We’re not going to support that loser’s funeral,” and he became furious, according to witnesses, when he saw flags lowered to half-staff. “What the fuck are we doing that for? Guy was a fucking loser,” the president told aides. Trump was not invited to McCain’s funeral. (These sources, and others quoted in this article, spoke on condition of anonymity. The White House did not return earlier calls for comment, but Alyssa Farah, a White House spokesperson, emailed me this statement shortly after this story was posted: “This report is false. President Trump holds the military in the highest regard.”

Now, even Fox News is backing up Goldberg’s story.

The suckers aren’t our brave men and women who put their lives on the line for our country, the suckers are the folks who line up behind this con man.

Hey, I will even throw in a cheese steak with that antique bell for you.