Archbishop Carl Bean, a pioneering AIDS activist, trailblazer in the LGBTQ Church movement, and international advocate for lesbian, gay, bisexual, transgender and queer persons, passed away on September 7. He was 77-years-old.

A charismatic figure who attracted legions of gay and straight supporters, Bean was well-known in Los Angeles for establishing Unity Fellowship Church of Christ (UFC) in 1982 and implementing the Minority AIDS Project (MAP) in 1985, which was the first organization of its kind started during a period when the disease was relatively new.

Unity Fellowship, often noted as the first Black church for LGBTQ persons, has grown to more than 17 affiliates in the U.S. and the Caribbean. MAP, which still operates in South L.A. serving more 1,500 people a year, offers prevention, care and treatment services for low-income African American and Latino individuals at a high risk or living with the HIV/AIDS virus.

Bean initially launched MAP with a group of volunteers meeting at a friend’s house and visiting local pantries to secure food for suffering individuals and families. Thanks to his winning personality, many influential Angelenos were persuaded to assist Bean, such as Danny Bakewell, Sr., former president and current chairman of the board of the Brotherhood Crusade, and Brenda Marsh-Mitchell, his executive assistant.

“I will never forget going to the Brotherhood Crusade’s offices on Slauson and asking for a meeting with Mr. Bakewell,” recalled Bean in his later years. “Mr. Bakewell’s door was open a little and he heard me mention the words HIV and AIDS and he came out and told Brenda to let me in. Brenda told me then and there, it must have divine intervention and God’s will because it’s not everyday people walk in off the street and get a meeting with Mr. Bakewell.”

Sharing his recollection of the encounter, Bakewell said, “Archbishop Carl Bean came into my office and was the first person to explain to me that AIDS was not a White gay man’s disease and that Black people were dying everyday from this dreaded disease.

“He told me how we needed to open an Black AIDS Clinic to serve our community and our people and the Brotherhood Crusade was one of the first contributors to Dr. Bean and the Minority AIDS Project.

“Many years later, we now understand how right he was and how his leadership saved thousands, if not millions of lives, within our community.  Dr. Bean was a pioneer in bringing to light the devastation of this disease in our community and I am proud that early on The Brotherhood Crusade was able to play a significant role in bringing Dr. Bean’s vision to our community,” stated Bakewell.

Retired Congresswoman Diane Watson was another ally of Bean and aided him with obtaining HIV/AIDS services. Remembering their relationship, she said two years ago, “I worked with Carl Bean and I knew that he could put together a program that would make people knowledgeable and avoid shunning against people who were diagnosed. Carl Bean was the coordinator, the inspiration and the person who could bring the community together regardless of the presumption in the street. I thank the Lord for Carl Bean.”

Bean made such an impression on L.A. City Council President Emeritus Herb J. Wesson, that the councilmember designated the intersection of Jefferson Blvd. and Sycamore Ave. in South Los Angeles as Archbishop Carl Bean Square. During the street ceremony in 2019, Wesson said he knew Bean since 1982 and the minister was “a determined man” who developed MAP into a national movement. A native of Baltimore, Maryland, Bean was born in May 1944. Raised in the church, he had a special affinity for music and sang in a melodious voice throughout his life. Bean was also involved with the NAACP youth program and learned about civil rights activism as a teen.

While Bean had accepted his sexuality as a youngster, his family and friends were not so understanding, leading Bean to hide his desires until he was outed by an acquaintance at 14-years-old. The episode led to his intense depression and forced hospitalization before he began to heal and was released.

At the age of 16, he relocated to New York City to pursue a gospel singing career. Over the next decade or so, Bean sang with several ensembles, acted in religious theatrical plays, and performed in several musical productions including Langston Hughes’ “Black Nativity” and Vinette Carroll’s “Don’t Bother Me, I Can’t Cope.”

Bean moved to Los Angeles in 1972 and formed a gospel group called Carl Bean and Universal Love. After some Motown producers heard him singing, Bean was signed up to sing “I Was Born This Way” by Bunny Jones.

In a biography, author Mark Bowman wrote about Bean, “The experience of recording this gay anthem in 1977 affirmed and illumined his call to ministry. The song received widespread play–moving up to #14 on the Billboard charts. He was finally able to publicly affirm being gay as a God-given gift.”

Later, Bean began his ministerial studies at Samaritan College and was ordained in 1982 by Archbishop William Morris O’Neill of the Christian Tabernacle Church. He founded Unity Fellowship of Christ Church and advertised his ministry in the L.A. Sentinel as a Bible study for gays and lesbians.

The fellowship grew in size and eventually the congregation bought a warehouse on West Jefferson Blvd., which became the mother church of Unity Fellowship. The church continues to minister to the LGBTQ community and also operates MAP on the campus.

In 2010, Bean published his autobiography, “I Was Born This Way: A Gay Preacher’s Journey Through Gospel Music, Disco Stardom and a Ministry in Christ.” In a chapter titled “Grace and Mercy,” Bean wrote, “As I look back over this journey starting with my innocent days as a little boy running the streets of Baltimore, I see how love sustained me. Love from my biological mother, my grandmother, my godparents, friends, preachers…love born of a need for connection…to feel worth and wanted.”

His celebration of life services are pending as of press time. 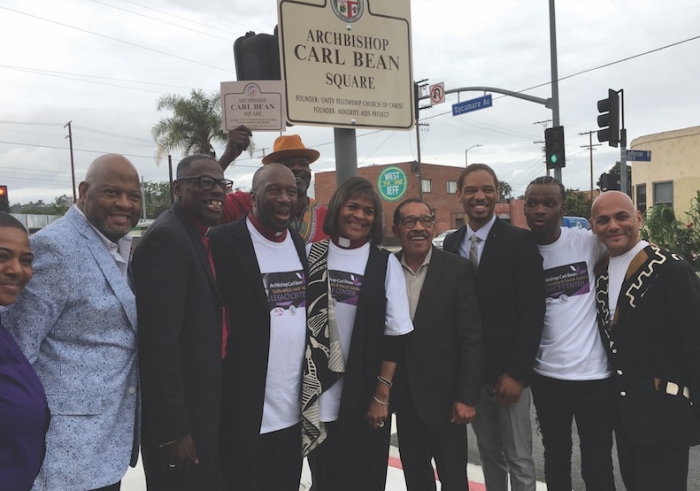