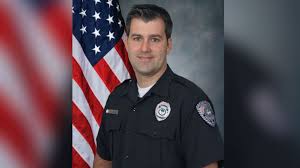 The shooting, which began as a traffic stop, occurred as Americans grapple with issues of trust between law enforcement and minority communities after a series of deaths of unarmed black men at the hands of police. They include the deaths of Michael Brown in Ferguson, Missouri, and Eric Garner on Staten Island, New York. Both sparked protests nationwide.

In the Charleston case, authorities said the victim, 50-year-old Walter Lamer Scott, was shot after the officer already hit him with a stun gun.

“When you’re wrong, you’re wrong,” Summey said. “When you make a bad decision, don’t care if you’re behind the shield or a citizen on the street, you have to live with that decision.”
A video of the shooting released to news media outlets shows the officer firing several times at the man’s back while he’s running away. It then shows the man falling down, the officer slowly walking toward him, and the officer placing him in handcuffs. He then walks away as he talks on his radio, and Scott is not moving. The officer later is seen dropping something by Scott’s side.
Slager’s attorney dropped him as a client Tuesday, a day after he had released a statement saying the officer felt threatened and that Scott was trying to grab the officer’s stun gun.
“This is a terrible tragedy that has impacted our community,” said the attorney, David Aylor.
North Charleston Police said Slager was arrested by officers of the South Carolina Law Enforcement Division. Justice Department spokeswoman Dena Iverson said the Federal Bureau of Investigation will also investigate the shooting.
At the news conference, North Charleston Police Chief Eddie Driggers confirmed the suspect was shot as he was running away from the officer.

“I have been around this police department a long time and all the officers on this force, the men and women, are like my children,” he told reporters, his voice cracking with emotion. “So you tell me how a father would react seeing his child do something? I’ll let you answer that yourself.”

A woman who answered the phone at Scott’s residence identified herself as the victim’s niece but did not give her name. “That’s great. That’s great,” she said, when told about the murder charge, then hung up.
North Charleston is South Carolina’s third-largest city and for years battled back from an economic slump caused by the closing of the Charleston Naval Base on the city’s waterfront in the mid-1990s.

But now the city has bounced back in a big way, largely in part to the huge investment by Boeing, which has a 787 aircraft manufacturing plant in the city and employs about 7,500 people in South Carolina, most of them in North Charleston.

In a separate case in South Carolina, a white police officer who shot a 68-year-old black man to death last year in his driveway was charged Tuesday with a felony: discharging a gun into an occupied vehicle. A prosecutor previously tried to indict North Augusta officer Justin Craven on a manslaughter charge in the February 2014 death of Ernest Satterwhite. But a grand jury instead chose misconduct in office, which is a far lesser charge.
Craven chased Satterwhite for 9 miles beyond city limits to the man’s driveway in Edgefield County. After Satterwhite parked, the officer repeatedly fired through the driver-side door, prosecutors said. The 25-year-old officer faces up to 10 years in prison if convicted of the gun charge.” [Source]

That’s what we are calling murder these days? “A bad decision”? Wow.

Anyway, we will just keep writing and educating from this end. Hopefully everyone is taking note.