Doris “Dorie” Miller, and hundreds of other messmen who were serving breakfast that morning, never dreamed that day in 1941, was the time for them to be heroes. That point is not to be questioned.

When the office of Rep. Eddie Bernice Johnson (D-Texas) contacted me about their desire to have Dorie Miller awarded the Medal of Honor, I was excited. Since 1942 there have been thousands of people attempting to have his Navy Cross upgraded to the Medal of Honor.

In the last several sessions, Rep. Johnson, with the support of the Congressional Black Caucus and members of both parties in Congress, has filed legislation to waive the statute of limitations so that Miller could receive the Medal of Honor.

“The Navy has concluded that the Navy Cross, the highest award that can be approved and awarded by the Secretary of the Navy, appropriately recognizes Petty Officer Miller’s heroic actions,” said Navy spokesman, Lt. Mike Kafka, who added that those seeking to upgrade Miller’s award can offer new evidence or ask the Navy to look at the case anew, a request Johnson may make.

First let me say, Lt. Kafka apparently did not do any research. In 1941 no Black messman was a petty officer. At the time of Miller’s actions the Navy was totally segregated. How could the Navy not recognize that racism was the underlying theme?

Absolutely we must ask again! 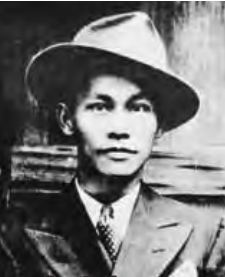 However this may not be new evidence, since racism is the birth defect of this country. What is new is the evidence of his long lasting legacy. I believe that we must look at Miller in a new light. The history of wars is generally written about battles as if there were no people. And when people are mentioned, it is the generals, admirals and presidents. Miller was not even a sailor; he was a messman second class, the very bottom of the Navy’s tight knit social thread. To shine a real light on World War II, we must see with today’s eyes the “little people,” the mess attendants of the world. Filipinos and Guamanians who chose to come to America following a dream; after a period of untold harassment and brutality, enlisted in the Navy only to become messmen. Servants!

Carlos Bulosan wrote “I feel like a criminal running away from a crime I did not commit. And this crime is that I am a Filipino in America.” That day, the “day that will live in infamy” was for heroes. Thousands of them! Most of whom we will never know. That day was a day for every man and woman to step out of their comfort zone and be counted. In America, that day was to question what people take for granted, what people hold to be true about “colored men.” For Miller that day was to break through the hypnosis of social conditioning; to take a stand at any cost; to be courageous and noble in their actions and in deeds. That December day was to be that moment.

“Even as Hitler espoused the theory of the “Superior Aryan Race,” the U.S. military practiced the theory of “African-American mental inferiority.” The Army War College study of 1940 described the African American as having ‘less developed mental capacities.” 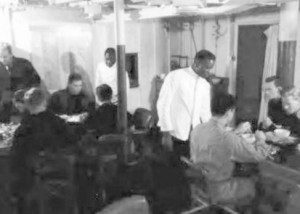 World War II African-American sailors were stripped of their dignity, their “somebodyness.” Regardless of their education they were expected to be messmen, stewards and cabin boys, not trained for combat.

They did not even wear the traditional Naval Anchor on their uniforms. Secretary of the Navy (Colonel) Frank Knox, (former publisher of the Chicago Daily News and the 1936 G.O.P. vice presidential nominee) wrote “the policy of not enlisting men of the colored races for any branch of the naval service but the messmen branch was adopted to meet the best interests of general ship efficiency.”

However, there is so much misinformation about Miller, his actions that day and even the ship he served on, nowonder he has not been awarded the Medal of Honor. Having had the rare opportunity of knowing men who served with him on the West Virginia as well as other survivors of the attack on the Pearl Harbor Dec. 7, 1941, I decided to revisit the mounds of articles, books and films about Miller. Much to my horror the vast majority of it was incorrect.

My friend, Ray Emory, a Pearl Harbor survivor and historian was gracious enough to spend the day with me and another friend as we combed through his records and files of Dec. 7. So much so that I now feel I have to rethink the recognition of Miller.

Some of the misinformation was trivial, but none the less it is out there.

The biggest misinformation and most often repeated stated that Miller served on the USS Arizona. That was not correct. All of the messmen who served on the Arizona went down with the ship. One article claimed he was on board the USS Missouri. That ship was not at Pearl Harbor the day of the attack. She was the last battleship commissioned by the U.S. Navy in June 1944.

His rate or rank has always been at question. In the Navy a person’s “rate” is the same as “rank” in the other branches of the military. At the time of the attack Miller was a messman attendant second class, a rate created for men of color only.

I have read in several articles that he was a seaman. At the time of the Dec. 7 attack, there were no Black seamen.

The Messman Branch, responsible for servicing officers only, was a racially segregated part of the U.S. Navy. White sailors could not serve in the Messman Branch, which was composed almost exclusively of African Americans, Guamanians, Chinese and Filipinos. Dorie Miller’s very public presence as a messman attracted criticism from civil rights leaders during the war, and the Roosevelt administration was under some pressure to address this inequality.

Some steps were taken throughout the war, but the navy’s leadership proved resistant to major change. In February 1943 the name of the branch was changed to Steward Branch, the word “officer” was dropped from rate titles, and “mess attendant” became “steward’s mate.”

The new rating of “cook” should not be confused with “ship’s cook,” which was part of the Commissary Branch.

In June 1944, cooks and stewards were authorized to wear petty officer-style rating badges. Despite the change in insignia, however, stewards and cooks were not petty officers and ranked below the most junior petty officer grade. Petty officer status was not extended to stewards until 1950.

Some articles have Miller as a cook. That is somewhat correct. At the time of the attack on Dec. 7 Miller was a messman. As the war raged on, men of color were promoted to the rate of cook, because they needed them to do more than wait on the officers. At the time of his death Miller had been promoted to cook third class. In April 1942 changes were announced to allow African Americans to serve in other capacities. Even so African Americans selected for ratings other than messman were to be segregated and commanded by White officers and chief petty officers.

The movie Pearl Harbor was probably the worst offender of the portrayal of Doris Miller. Several people say it is only a movie. And that is true. However, a majority of people get all they know about history from movies. Lt. Frederick White, who served on the USS West Virginia, wrote that Miller was called up to the deck to move the ship’s captain because he had been mortally wounded because he (Miller) was the biggest man on the ship. In the movie it is apparent to all watching that Cuba Gooding Jr. was not the biggest man on the ship.

At the time of the filming at Pearl Harbor, I complained about Cuba Gooding Jr. being portrayed as Dorie Miller because he was not big enough. I was told by one of the historians, “at least the character is in the film.” What else could I say?

Director of the movie Pearl Harbor Michael Bay acknowledges on his DVD commentary track that Miller’s actions were altered slightly simply for the sake of the narrative; it was more dramatic to have him comfort the dying captain and then deliver his final order.

All so the movie portrays Miller on Dec. 7, 1941 in a uniform with a cook’s second class rate. As we have said before the cook’s rate did not exist in 1941. This error is difficult to attribute to anything other than a lack of adequate research. The National Parks Service and the U.S. Navy are credited as consultants on the film.

Special to the NNPA from the Afro-American Newspaper