NFL Hall of Famer Mike Singletary knew exactly what he wanted to do after he retired from playing the game he loved. After a legendary 12-year career with the Chicago Bears — including the celebrated 1985 Super Bowl champion squad — Singletary knew he wanted to coach. Like, really badly.
“When I retired, I knew I would coach,” said Singletary, who is barking plays as head coach of the Memphis Express, one of eight startup teams in the Alliance of American Football.

Singletary retired as a player in 1992 but didn’t take his first gig as a linebacker’s coach for the Baltimore Ravens until 11 years later, in 2003.


So why the gap? That’s easy, Singletary said. Like most successful men, he knows when to listen to his wife.

“I asked a few coaches I really respected, ‘How do you become a great husband, a great father and a great coach?’” Singletary told The New Tri-State Defender in an exclusive interview. “And they all said, ‘Mike, make sure you’ve got a great wife. Because you’re not going to be there. You’re going to be coaching that team.’”
Having grown up in what he described as a “broken home,” the option of being away from his children was not an option at all. So instead, he occupied himself with business ventures, carving out a nice career as a consultant on leadership and business development. Until one day, he came home to find his wife in tears.
“She said, ‘Mike, you’re not going to want to hear this, but it’s time to start coaching,’” Singletary smiled. “She knows me. She knows me better sometimes than I know myself.
She knows that that’s what I love.
“She was like, ‘Mike, we’ll work it out,’” continued Singletary, 60. “‘The kids know you. I certainly know you. And you’re driving me crazy here at the house, doing all types of projects. But it’s time. It’s time to do what God called you to do.’” 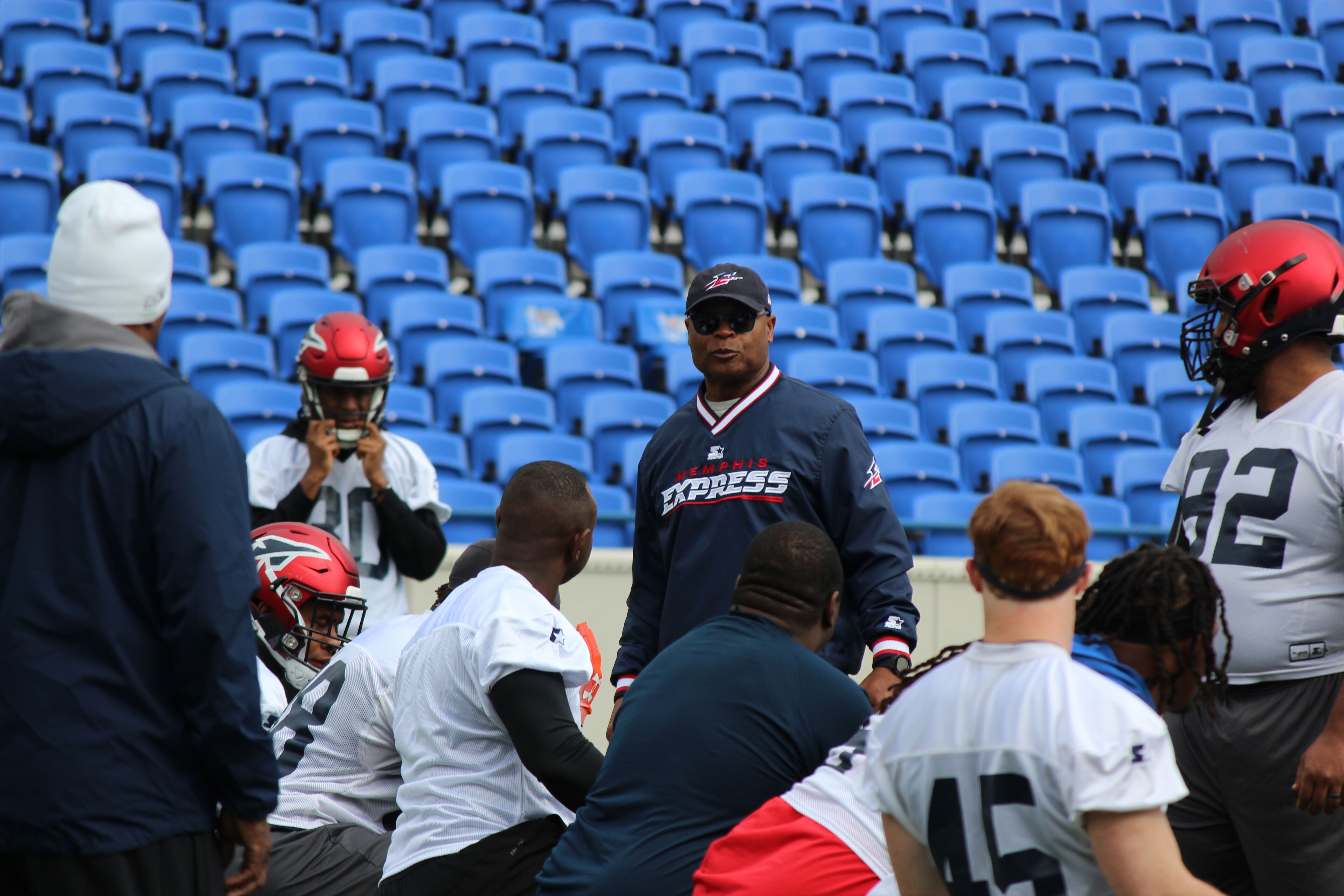 Since then, Singletary has been an assistant coach for multiple NFL teams and even had a one-season run as head coach of the San Francisco 49ers in 2009. His last NFL coaching gig was as a defensive assistant with the L.A. Rams in 2016.
Then, in the fall of 2017, Singletary had a conversation with celebrated former NFL executive and analyst Bill Polian. “I told him that one day, I’m going to be one of the greatest coaches of all time,” Singletary said.
The conversation must have stuck with Polian. In March 2018, Polian co-founded the AAF along with TV producer Charlie Ebersol, the son of NFL broadcast legend Dick Ebersol. Polian called Singletary to gauge his interest in signing on. It meant that he’d have to leave behind his new job as coach at Texas Christian Academy. Singletary accepted.
“Coaching high school was fantastic,” Singletary said. “Coaching (the Express), one after the other, it’s outstanding. Everything I want to do is coaching and meeting and developing (players) and I’m excited about that.”
Fast forward to an uncommonly balmy February day at Liberty Bowl Stadium. Singletary is putting his squad through their paces in preparation for the franchise’s debut, an away game against the Birmingham Iron. The Express makad their Memphis debut on Feb. 16 against the Arizona Hotshots.
Memphis has seen its share of startup pro football leagues – the USFL’s Memphis Showboats in the 1980s and more recently, the Memphis Maniax of the doomed XFL league in 2003. But the AAF comes to Memphis well-funded, with a stream of former NFL players, coaches and executives adding a certain cachet to the enterprise.
But the AAF will have a few new wrinkles that officials hope will mean both eyeballs and money. For one, in addition to a national TV deal with CBS, the Express just announced a local deal with Nexstar Media Group that means CW30 will broadcast three games.
“In crafting this deal we were looking to create a reliable home that offers our fans comfort and familiarity,” said Kosha Irby, Memphis Express team president. “We’re going to rely on Nexstar to help us grow our regional footprint and enhance our exposure with their proven ability to broadcast a quality product.”
But that’s not all. Thanks to an exclusive gaming deal with MGM Resorts International, fans will also be able to watch – and wager – on games via the AAF app. Using cutting-edge motion tracking sensors and hyper-fast data processing, fans can place “in-game” bets on players in virtual real time – enabling such wagers as whether the Express will get a first down on the next play, or how many yards a running back will have by halftime.
And far from an adversarial relationship with the NFL, the AAF is embracing the fact that some of its players – and maybe some of its coaches – may be scooped up by the NFL. Singletary is just fine with that.
“As a coach, it’s my dream and hope that most of these young men, because of what we’re going to teach them, that the NFL will be hungry for a guy on our team – because they know what they’re getting,” he said. “Not only will they be getting a better athlete, they’ll get a young man who respects authority and (teams) can move forward with that.”
And if an NFL team comes calling looking for a new head coach?
“All I’m going to do is my best, and wherever that leads me, I’m good with that,” Singletary said.
In the meantime, there’s football to play right here in Memphis. What should fans expect out of springtime pro football in Memphis?
“We’re just seeking to make you proud,” Singletary said. “We just want people to be proud of the product we put out here on the field. So, come out and support us.”