On May 30, the NBA icon penned an article for the Los Angeles Times explaining how the protests that ensued after the death of Floyd is a result of a long history of discrimination and racism.

Abdul-Jabbar explained the emotional reaction he had when watching the video of Derek Chauvin kneeling on Floyd’s neck.

“It’s almost nine minutes of horror. I broke down and started crying,” Abdul-Jabbar said. “I was out of it for a good half hour because you get to a point where you can’t take anymore of it.”

“Black Americans were singled out and discriminated against and oppressed,” he said. “But there’s also a long tradition of Americans waking up to the fact that oppression is not right.” 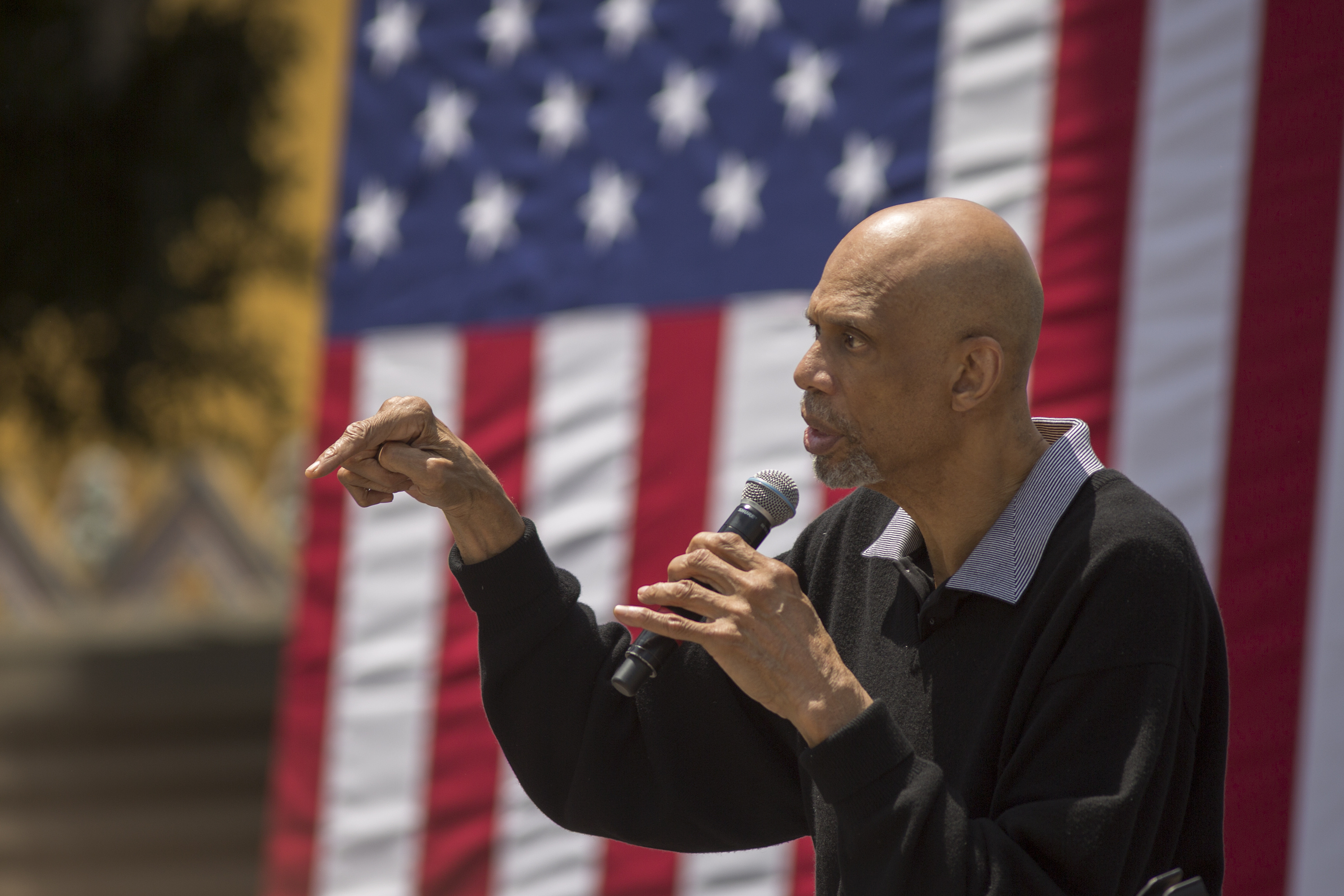 What gave Abdul-Jabbar hope and optimism is seeing the diversity in the crowds of American protesters and seeing the outrage of Floyd’s death in masses of people not native to the United States.

“People of all descriptions got an understanding of what it means to be a Black American and to be singled out and discriminated against,” he said. “But we have to have faith that there’s some goodness in the other people in the country. This time, they got it and I think a whole lot of people are getting it now.”

Brooks inquired about effective methods of protesting and Abdul-Jabbar mentioned how limiting anger could lead to effective communication. Throughout the peaceful protests, there was news of businesses being looted and set on fire. People at protests have been pelted with tear gas and rubber bullets.

“If we can logically explain to them why they need to help us eliminate some very bad situations in America, they might listen and we might win them over with the righteousness of our cause,” Abdul-Jabbar said. “It’s gone around the world; people are protesting Mr. Floyd. I think that that was a remarkable breakthrough.”

Since the death of Floyd, countless pro athletes have been speaking out against police brutality, something former quarterback, Colin Kaepernick, was calling attention to during his national anthem protests back in 2016. Although NFL commissioner Roger Goodell recently issued a statement condemning racial oppression, they were not prepared for the subject when Kaepernick brought it up.

“[the NFL] ostracized him, they blackballed him, they denied him a job,” Abdul-Jabbar said. “They didn’t like what he was calling attention to and now, they’re gonna have to deal with it again. 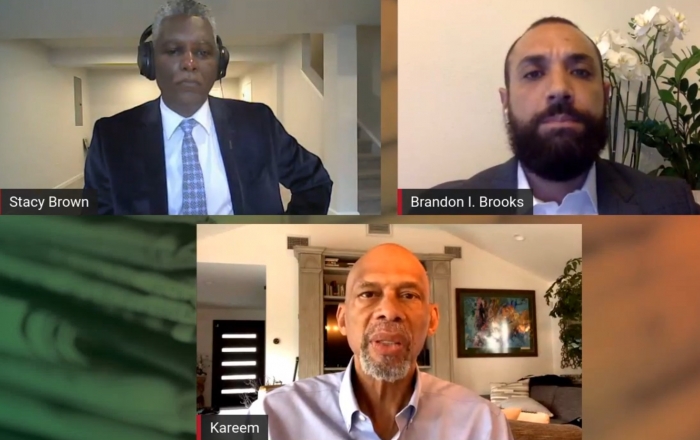 Although he had a father and grandfather in law enforcement, Abdul-Jabbar critiqued the Minneapolis police officers.

“The whole idea of law enforcement is you have to treat everybody the same way, but that was not the case here in America,” Abdul-Jabbar said.

His father, however, was transparent with Abdul-Jabbar when they would talk about interacting with the police. He would tell Abdul-Jabbar that a wrong action could cost him his life and that Abdul-Jabbar would be punished by him if he was doing wrong.

“I’m just happy that I got the talk and I listened and I was able to negotiate my way around a number of what could have been bad incidents,” Abdul-Jabbar said.

In his Op-Ed piece, he called Chauvin “a sworn officer who looked calm and entitled and devoid of pity: the banality of evil incarnate.”

The need to be an activist started in Abdul-Jabbar when he was eight years old, when the murder of Emmett Till made national news. When he asked his parents about the news story, they did not know how to explain to him.

“So, I started just watching the news,” Abdul-Jabbar said. “I watched the evening news and I played close attention to the Civil Rights Movement.” 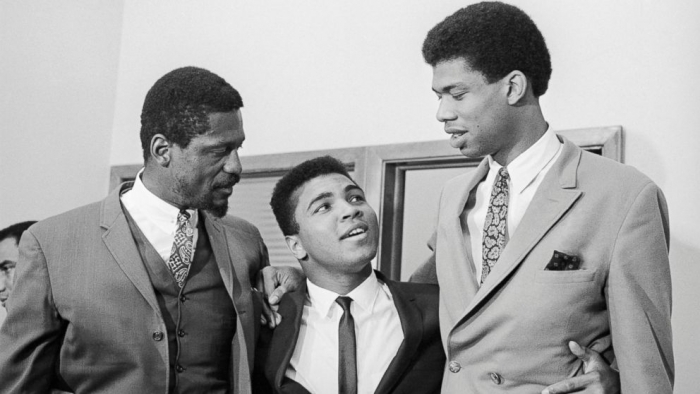 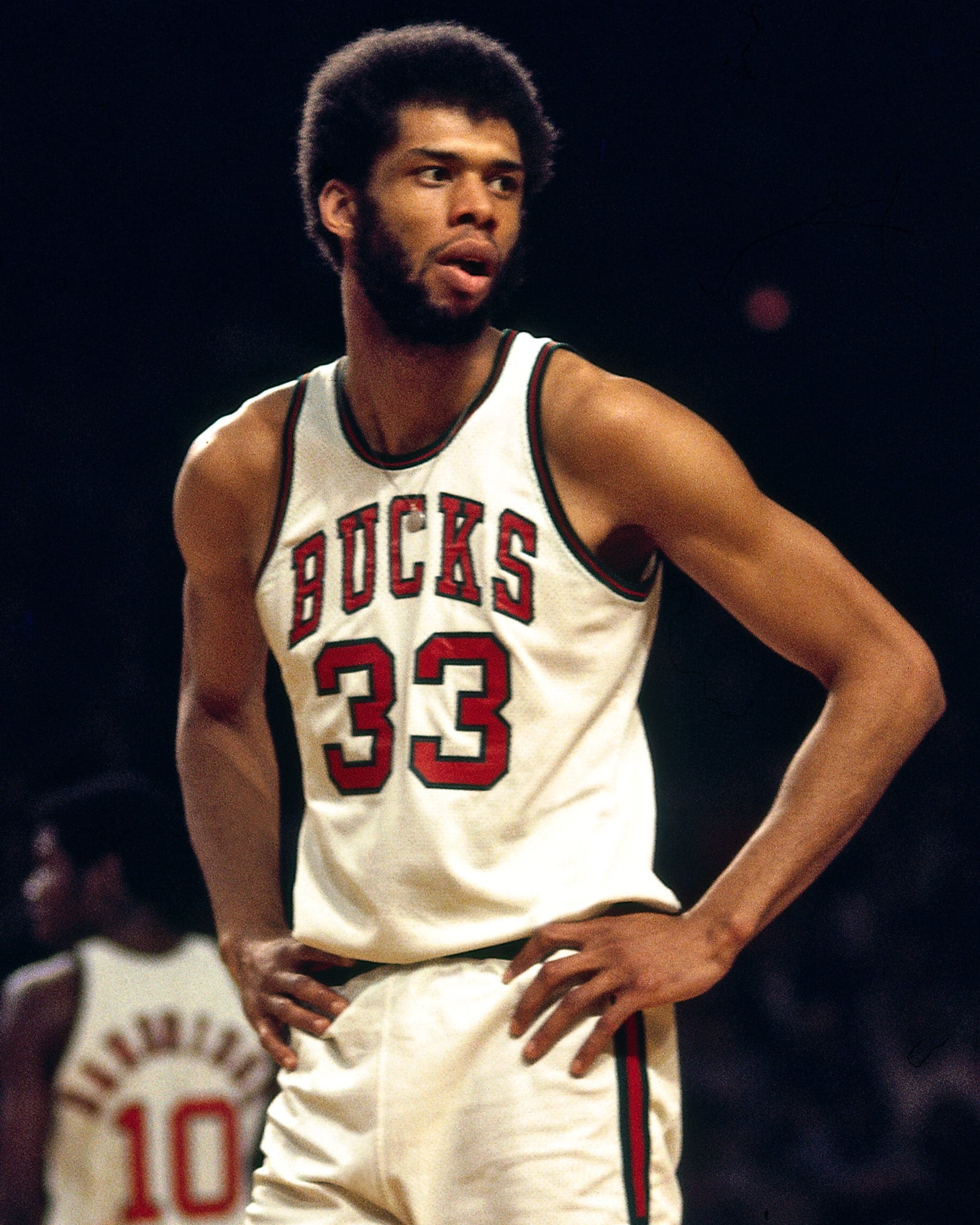 Kareem Abdul-Jabbar playing with the Milwaukee Bucks. The Bucks won the 1971 NBA championship with Abdul- Jabbar leading the team.(AP PHOTO)

Bill Russell made for a great role model for Abdul-Jabbar when it came to athletes being activists. When civil rights activist, Medgar Evers was assassinated, Russell traveled to Mississippi to host an integrated basketball camp.

“He was a firm supporter of the Civil Rights Movement,” Abdul-Jabbar said. “His approach was dignified and focused and I really learned a lot just by observing the guys that came before me.”

A native of New York City, Abdul-Jabbar acquired notoriety playing basketball for UCLA, helping the Bruins win three national titles. In 1969, he became the first overall pick in the NBA Draft by the Milwaukee Bucks. He won his first championship in 1971 and was traded to the Los Angeles Lakers in 1975.

Abdul-Jabbar became a quintessential factor in the Lakers’ Showtime era, helping them win five championships. He is a three-time league MVP known for his accurate skyhook shot. Abdul-Jabbar authored 16 books, including “Sasquatch in the Paint,” “On the Shoulders of Giants,” and “Coach Wooden and Me.” Abdul-Jabbar retired as the NBA all-time leading scorer with 38,387 points in 1989. 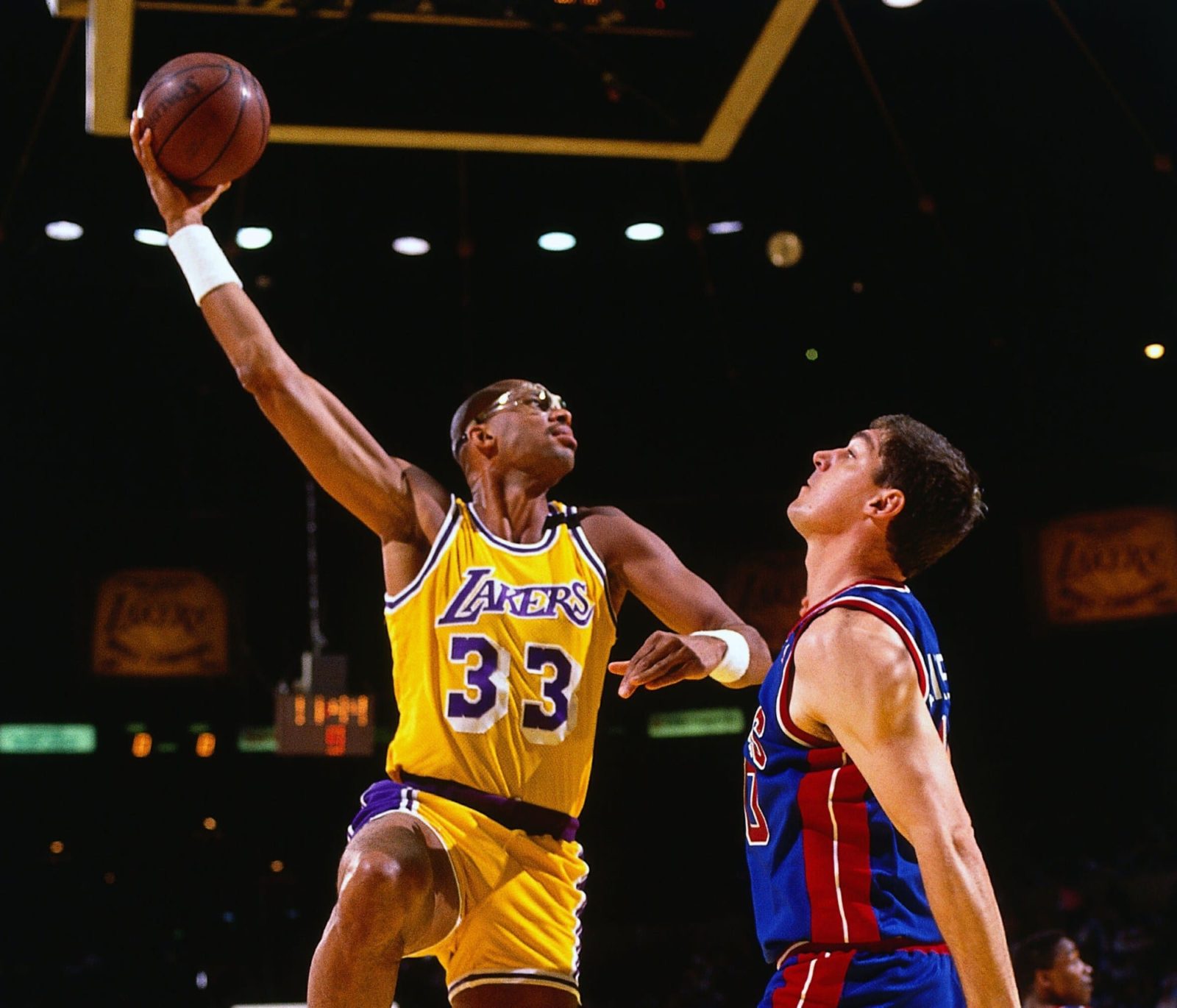 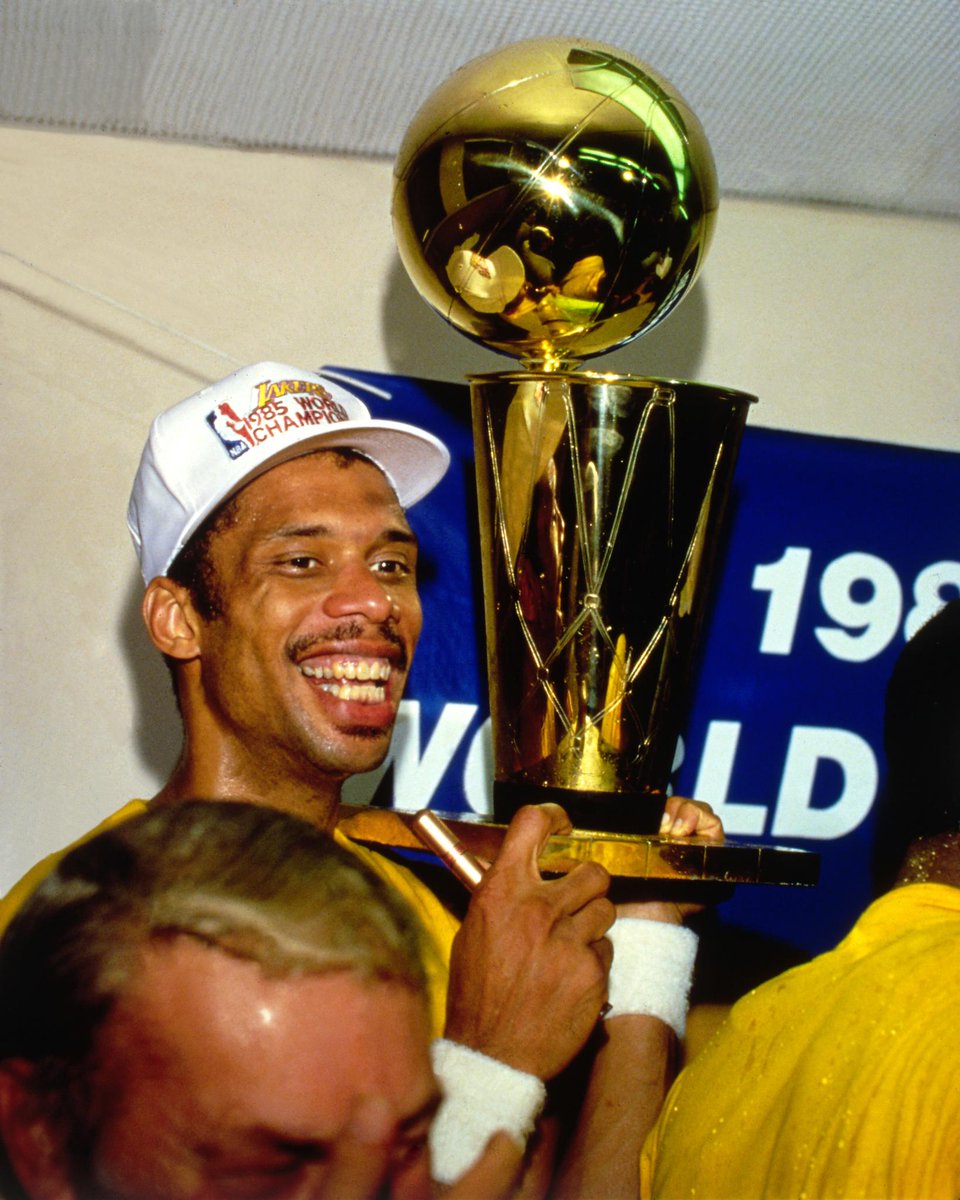 Abdul-Jabbar holds up the 1985 NBA championship trophy won by his Lakers. (GETTY IMAGES)