Have you noticed more cats riding in strollers lately? Or bumper stickers that read, “I love my granddogs”? You’re not imagining it. More people are investing serious time, money and attention in their pets.

It looks an awful lot like parenting, but of pets, not people.

Can this kind of caregiving toward animals really be considered parenting? Or is something else going on here?

I’m an anthropologist who studies human-animal interactions, a field known as anthrozoology. I want to better understand the behavior of pet parenting by people from the perspective of evolutionary science. After all, cultural norms and evolutionary biology both suggest people should focus on raising their own children, not animals of a completely different species. 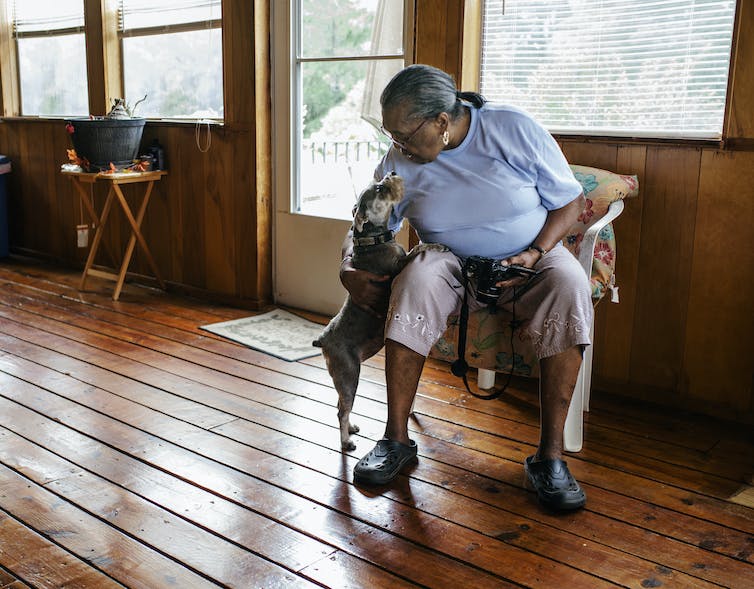 Pet parenting can provide love and companionship to both human and animal.
Willie B. Thomas/DigitalVision via Getty Images

The current moment is unique in human history. Many societies, including the U.S., are experiencing major changes in how people live, work and socialize. Fertility rates are low, and people have more flexibility in how they choose to live their lives. These factors can lead people to further their education and value defining oneself as an individual over family obligations. With basics taken care of, people can focus on higher order psychological needs like feelings of achievement and a sense of purpose.

The scene is set for people to actively choose to focus on pets instead of children.

In earlier research, I interviewed 28 self-identified child-free pet owners to better understand how they relate to their animals. These individuals pointedly shared that they had actively chosen cats and dogs instead of children. In many cases, their use of parent-child relational terms – calling themselves a pet’s “mom” for instance – was simply shorthand.

They emphasized fulfilling the species-specific needs of their dogs and cats. For example, they might fulfill the animal’s need to forage by feeding meals using a food puzzle, while most children are fed at the table. These pet owners acknowledged differences in the nutrition, socialization and learning needs of animals versus children. They were not unthinkingly replacing human children with “fur babies” by treating them like small, furry humans.

Other researchers find similar connections, showing that child-free pet owners perceive their companions as emotional, thinking individuals. This way of understanding the mind of the animal helps lead to the development of a parent identity toward companion animals. In other cases, uncertain individuals find their need to nurture sufficiently fulfilled by caring for pets, cementing their fertility decisions to remain child-free.

Nurturing others is part of being human

Yet, these findings still do not answer this question: Are people who choose pets over children truly parenting their pets? To answer, I turned to the evolution of parenting and caregiving.

Evolutionary anthropologist Sarah Hrdy wrote in 2009 that humans are cooperative breeders. This means it is literally in our DNA and our ancestral history to help care for offspring who are not our own. Anthropologists and biologists call this trait alloparenting. It is an evolutionary adaptation that helped human beings who cooperatively raised children survive. For early humans, this ancient environment was likely made up of small, foraging societies in which some people exchanged child care for food and other resources.

I propose that it is this evolutionary history that explains pet parenting. If people evolved to alloparent, and our environment is now making caring for children more difficult or less appealing to some, it makes sense for people to alloparent other species entering their homes. Alloparenting companion animals can offer a way to fulfill the evolved need to nurture while reducing the investment of time, money and emotional energy compared to raising children.

Untangling differences in caring for pets

To further understand this phenomenon of child-free adults parenting pets, I launched an online survey via social media, seeking responses from U.S.-based dog and cat owners over the age of 18. The survey included questions about attachment and caregiving behaviors using the Lexington Attachment to Pets Scale. It also asked a series of questions I developed to probe specific human caretaking behaviors oriented toward pets – things like feeding, bathing and training – as well as how much autonomy companion animals had in the home.

The final sample of 917 respondents included 620 parents, 254 nonparents and 43 people who were undecided or did not answer. Most of the respondents were also married or in a domestic partnership for over one year (57%), between the ages of 25 and 60 (72%) and had at least a bachelor’s degree (77%). They were also mostly women (85%) and heterosexual (85%), a common situation in human-animal interactions research.

Both parents and nonparents reported high amounts of training and play with their pets. This finding makes sense given that all pet owners need to help their dogs and cats learn how to navigate a human world. Survey respondents reported socializing, training and enrichment, including play, for their animals.

Nonparents were more likely to be the one providing general care for the animal. This finding also makes sense since parents often adopt or purchase companion animals as a way to help their children learn responsibility and to care for others. Child-free animal owners invest time, money and emotional energy directly in their pets.

Nonparents reported higher rates of general attachment to their animals. They more frequently viewed their pets as individuals. Nonparents were also more likely to use family terms such as “parent,” “child,” “kids” and “guardians” when referring to their relationships with their pet.

It is this difference, combined with the evidence from my earlier research that these individuals address the species-specific needs of the dogs and cats in their care, that suggests pet parenting is, truly, parenting pets. Though the details may look quite different – attending training classes instead of school functions, or providing smell walks for dogs instead of coloring books for children – both practices fulfill the same evolved function. Whether child or pet, people are meeting the same evolved need to care for, teach and love a sentient other.

My colleagues and I continue to collect data from all over the world about how people live with animals. For now, this study provides evidence that, perhaps rather than being evolved to parent, humans are evolved to nurture. And as a result, who and when we parent is much more flexible than you might initially believe.

[Get our best science, health and technology stories. Sign up for The Conversation’s science newsletter.]